You may not be the only one reading your messages in your Gmail account.

Google said a year ago it would stop its computers from scanning the inboxes of Gmail users for information to personalize advertisements, saying it wanted users to “remain confident that Google will keep privacy and security paramount.”

While Google itself has stopped scanning Gmail users’ email, some third-party developers have created apps that can access consumers’ accounts and scan their messages for marketing purposes.

Google has long allowed software developers the ability to access users’ accounts as long as users gave them permission. That ability was designed to allow developers to create apps that consumers could use to add events to their Google Calendars or to send messages from their Gmail accounts.

But marketing companies have created apps that take advantage of that access to get insights into consumers’ behavior, according to the report. The apps offer things such as price comparison services or travel itinerary planning, but the language in their service agreements allows them to view users’ email as well. In fact, it’s become a “common practice” for marketing companies to scan consumers’ email.

It isn’t clear how carefully Google is monitoring such uses. Many consumers may not be aware that they’ve given apps such access to their accounts. Even if they are, Facebook’s Cambridge Analytica scandal offers a worrisome example of how similar access to consumer data can be abused.

Here’s how to see which apps have access to your Google account and how to block them from accessing it in the future.

To get to your Google Account page, select the “Account” icon from the app menu in the top right-hand corner of your Gmail account or navigate to https://myaccount.google.com

In that section, you’ll see all of the apps to which you’ve given any kind of access since you created your account.

You’ll see what kinds of information and services inside your Google account to which the apps have access.

Apps in the “Signing in with Google” section have access to your name, email address, and profile picture. But in some cases, they may have access to more of your information — potentially a lot more, such as the ability to read and delete your email messages.

You likely gave the “Signing in with Google” apps permission to access such data because you wanted to use your Google login to sign into your accounts with them instead of having to create separate user accounts and passwords. In fact, according to a Google support page, these apps often “can see and change nearly all information in your Google Account.”

If you see one you don’t trust, you can block it by clicking on “Remove Access.” 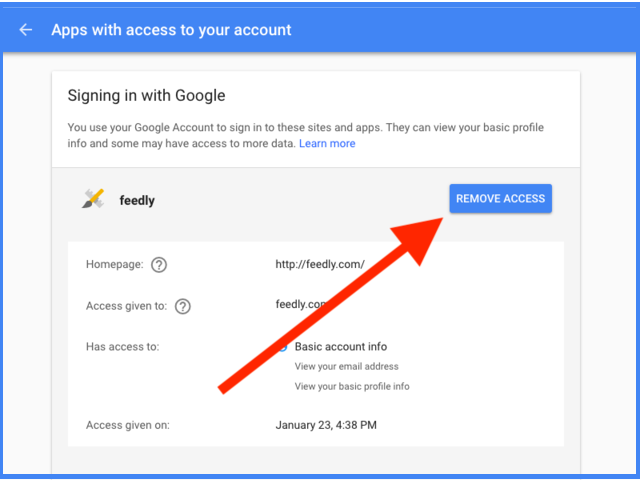 After clicking on that button you’ll have to click “OK” to confirm that you really want to block the app. The app should then disappear from the list of apps that have access to your account and should no longer have any ability to view or do anything else with your email or other data.