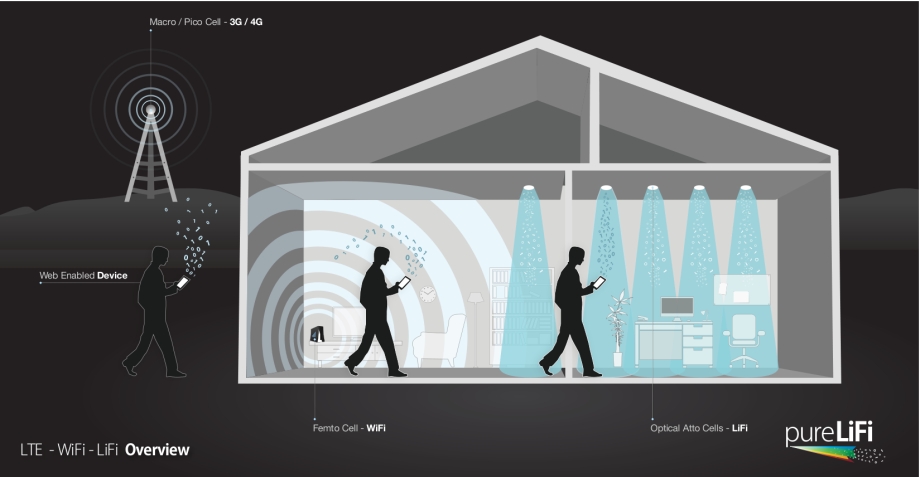 The term “Li-Fi” (Light Fidelity) is the brainchild of German physicist Harald Haas, who first presented the idea in July 2011 during a TED Talk. Mr. Haas, who is a professor of mobile communications at the University of Edinburgh, founded the company pureLiFi a year after his TED Talk, bringing together groups of researchers who had been researching Li-Fi technology since 2008. The company already has two products, and has recently secured a deal with a French industrial-lighting company Lucibel to utilize Li-Fi in its industrial products from Q3 2016 onward.

Mr. Haas revealed at the Ted Talk that every LED light bulb could be converted into a wireless router with the addition of a small microchip. This is important because aside from transmitting data, Li-Fi proves to be a smart lighting solution, particularly in industrial settings. Illumination and data transmission can all be achieved through what Mr.Haas calls a “cleaner, greener” solution. He claims that in the future, each one of the billions of light bulbs could help transmit Li-Fi in various settings.

With LiFi technology, data travels in the visible light spectrum through LEDs.  This makes it possible to provide wireless internet access at speeds of over 100 Gbps, although this is still in the Lab.

Unlike Wi-Fi network signals, Li-Fi is based on light and can’t penetrate through walls, which makes it more secure from external sniffing. Meanwhile, it also means there is less interference from other devices.

How does VLC work?

When a constant current is applied to an LED light bulb a constant stream of photons are emitted from the bulb which is observed as visible light. If the current is varied slowly the output intensity of the light dims up and down. Because LED bulbs are semi-conductor devices, the current, and hence the optical output, can be modulated at extremely high speeds which can be detected by a photo-detector device and converted back to electrical current. The intensity modulation is imperceptible to the human eye, and thus communication is just as seamless ad RF. Using this technique, high speed information can be transmitted from an LED light bulb. 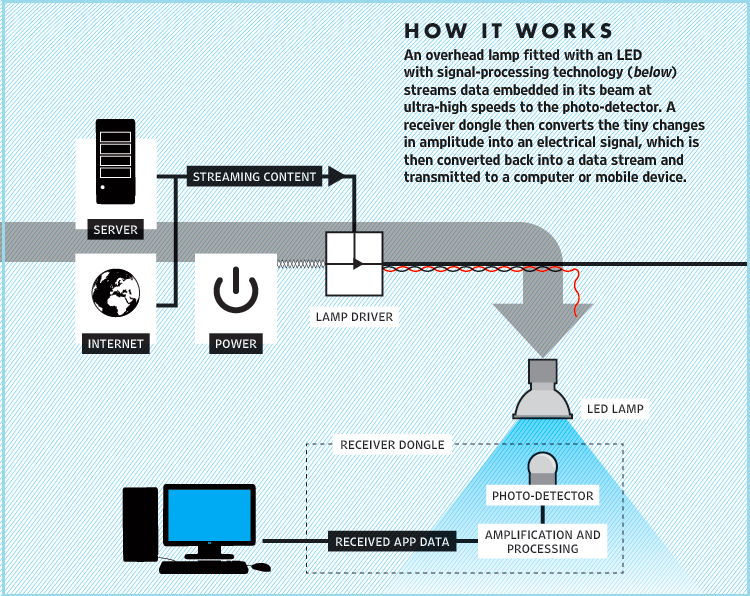 Radio frequency communication requires radio circuits, antennas and complex receivers, whereas Li-Fi is much simpler and uses direct modulation methods similar to those used in low-cost infra-red communications devices such as remote control units. Infra-red communication is limited in power due to eye safety requirements, whereas LED light bulbs have high intensities and can achieve very large data rates.

Li-Fi allows users to roam between lamps and still have connectivity as well as multiple users connecting to the same light and still getting different data streams.

Li-Fi is different from VLC in:

LiFi technology provides many benefits for users including speed, energy efficiency and security.

In our tests, LiFi has produced speed of over 100 Gbps (in a controlled environment).  These speeds can be achieved due to low interference (compared to radio frequencies), and high bandwidth due to the visible light spectrum which is 10,000 times more than the RF spectrum and allows for optimal users coverage no matter the number of users.

Wi-Fi signals penetrate walls and ceilings, LiFi signals can only be received in the area lit, yet allows for roaming between lights. LiFi is confined to the illuminated area, providing a very controllable environment. The signals cannot travel through walls and are fully secure – essentially eliminating the threat of data being hacked remotely. There is therefore no risk for remote piracy through the LiFi system. This solution is of great interest to sensitive operations such as R&D, defence, banks, security systems, etc.

Energy consumption is minimised via the use of LED illumination, with the transmission of data requiring negligible additional power.

Visible light wavelengths are harmless to humans, even beneficial at specific wavelengths. LiFi comes as an alternative to radio waves which is a key characteristic to sensitive environments such as hospitals, medical centres, schools, some industrial installations…

The area covered by one Wi-Fi access point has 10s or 100s of lights. Each LiFi light can deliver the same speed or greater than a Wi-Fi access point. Therefore, in the same area, LiFi can provide 10x or 100x or 1000x greater wireless capacity. That is Mbps per square meter. 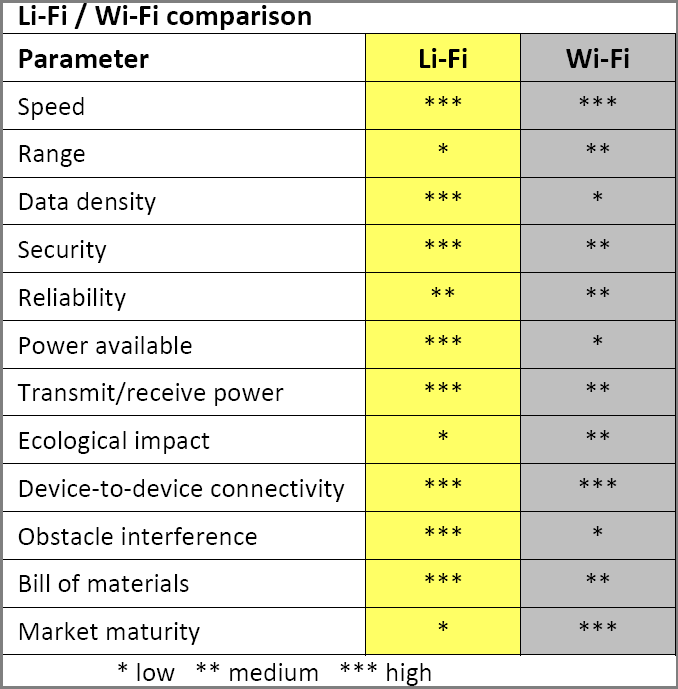 Li-Fi does not interfere with radio signals and can hence be used in areas where interference is an issue, such as during a flight. Li-Fi also operates on the visible light spectrum, which is 10,000 times larger than the more restricted spectrum for radio waves. With a rising number of spectrums being used for Wi-Fi, the technology is soon expected to run out of spectrums to accommodate users. This could lead to data traffic congestion, which is already an issue many will have experienced in the form of low Wi-Fi speeds in crowded areas.